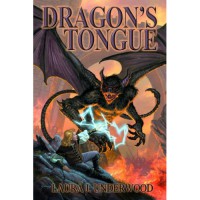 Dragon’s Tongue is the typical magic wielding, overly powerful and charismatic book that I enjoy when it comes to fantasy. I am someone that likes my main character to be “special.” This is usually almost always the case, as one of the reasons most authors have their main character the focus of their story is due to them having that special quality. But more than just being special, I like my main characters to be secretly powerful, and their weakness being them not realizing it. This is the case in Dragon’s Tongue.

Laura J. Underwood centers her book on a young minstrel, or bard, that has joined an academy where he can learn magic, but of course, his knowledge of is very limited and he starts as being a somewhat weak caster. Alaric, the protagonist, is better known for his music and playing. He is considered one of the best bards of his time, and this draws the attention of those around him. Through his music and storytelling, Alaric gains an ally from a very magically powerful and political influential schoolmate who offers to be Alaric’s friend, and uses those musical talents to add to his own personal charm. Along with gaining the attention of Fenelon, his new-found friend, he managed to catch the interest of a demon, Vagner.

Dragon’s Tongue takes you on the forbidden adventure of a bond between a young bard, and a high-level demon. Together thye learn the secrets hidden deep behind the vile of magic in Alaric, and how to stop Vagner’s master in obtaining it. The story contains betrayal, secrets, dark magic, music, humor, and of course, a lot of adventure. Though Laura created a powerful main character, she left him ignorant of most of it, which I like, and created Fenelon as the main wielder.

This book is a treasure you wont find in the bookstore. Though the writing is topnotch, the details unique on their own (as using summoning magic is more of a rarity), this is published from a very small company. I personally have contacted Laura J. Underwood when it became difficult to obtain her second book, Wandering Lark, and she was quick with a reply and very nice. I do dislike “ebooks” and am lucky enough to have the actual physical copies of all of the works Laura has produced for this series. I enjoy authors that take the time for their fans and appreciate all her work. Hopefully she will produce more.

Along with the 2 main books for this story, Laura J. Underwood created another 2 short stories, which she gave an autograph copy of one to me when I ordered the second book in the series. I do feel that these two thick volumes aren’t enough though, and believe more should be in store for Alaric. Of course, I tend to have that feeling with most books I read where I develop a deep fondness for the character.